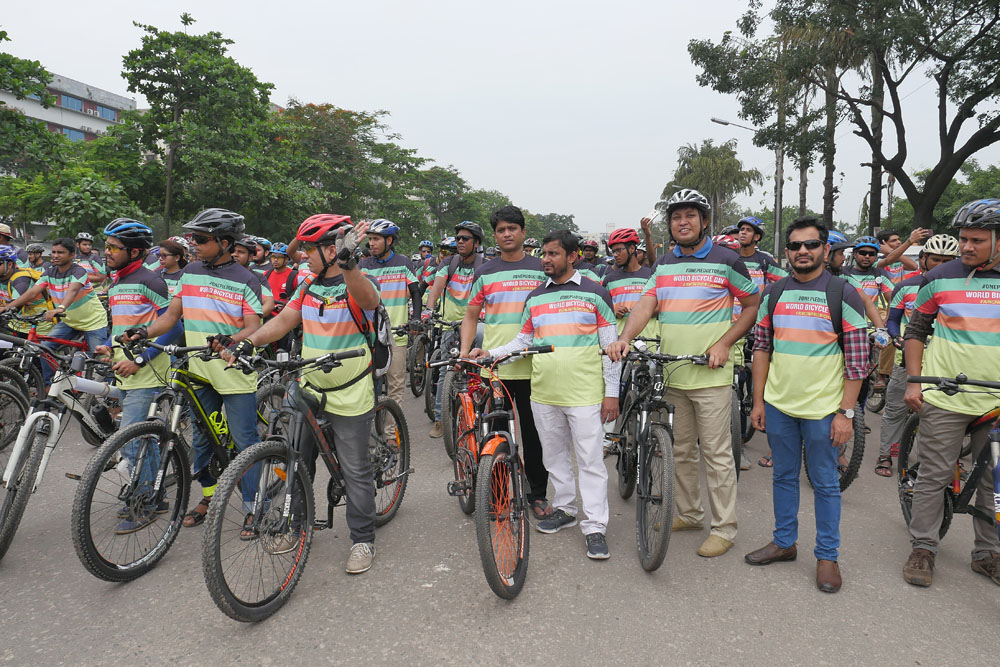 The first-ever World Bicycle Day was observed in Dhaka on Saturday, a day before it is being celebrated elsewhere in the world due to Ramadan and weekend. Speaking on the occasion, government officials and experts said that the increased use of bicycle would reduce traffic congestion and environmental pollution in the capital, said by Work for a Better Bangladesh Trust. On April 12 this year, the United Nations General Assembly approved June 3 as the official day of awareness about multiple societal benefits of using the bicycle for transport and leisure.

In Bangladesh, the day was celebrated with a theme highlighting the use of bicycles as a means to end traffic congestion and pollution. To mark the day, Rajdhahi Unnayan Kartripakkha, Dhaka Transport Coordination Authority, Dhaka North City Corporation, UNDP Bangladesh, BDCyclists and WBBT jointly organized a discussion and a procession at South Plaza of Manik Mia Avenue in the capital. The discussants described bicycles as an environmentally-friendly, fuel-less, and useful vehicle which improves health and ability of the riders. In Dhaka, cycling is becoming a popular vehicle to avoid traffic congestions, but due to the lack of separate lanes and parking facilities cyclists are facing difficulties and accidents, they said.

Officials claimed that the ongoing Detailed Area Plan had given priority on walking and cycling while keeping facilities for walking and cycling had been made mandatory in approving new residential projects. DNCC is also scheduled to construct separate bicycle lanes in areas under its jurisdiction within this year, officials said. Rights activists urged the authorities to formulate a bicycle-friendly policy as well as planning, infrastructure and awareness initiatives. The National Multimodal Transport Policy 2013 stipulates that separate lanes for bicycles must be kept on streets. The discussion was followed by a procession of about 400 cyclists in Farmgate, Bijoy Sarani, and Manik Mia Avenue areas. The cyclists vowed to ride bicycles at least one day each week. Rajuk’s Detailed Area Plan project director Md Ashraful Islam and project manager Hasibul Kabir, BDCyclists moderator Fuad Ahsan Chowdhury and WBBT programme manager Maruf Hossain, among others, attended the discussion.

Other Activity
Farmers’ Market in Gazipur Ward No.54 Has Been Inaugurated to Ensure Safe Food
Safe food will be ensured in all wards of NCC says Mayor Selina Hayat Ivy during inauguration ceremony of farmers’ market
Farmers’ Market Inaugurated in Ward no.56 of DSCC
Importance of Implementing the Law to Stop Advertising of Tobacco Products
Current Status and Actions to be taken on Implementation and Amendment of Tobacco Control Act