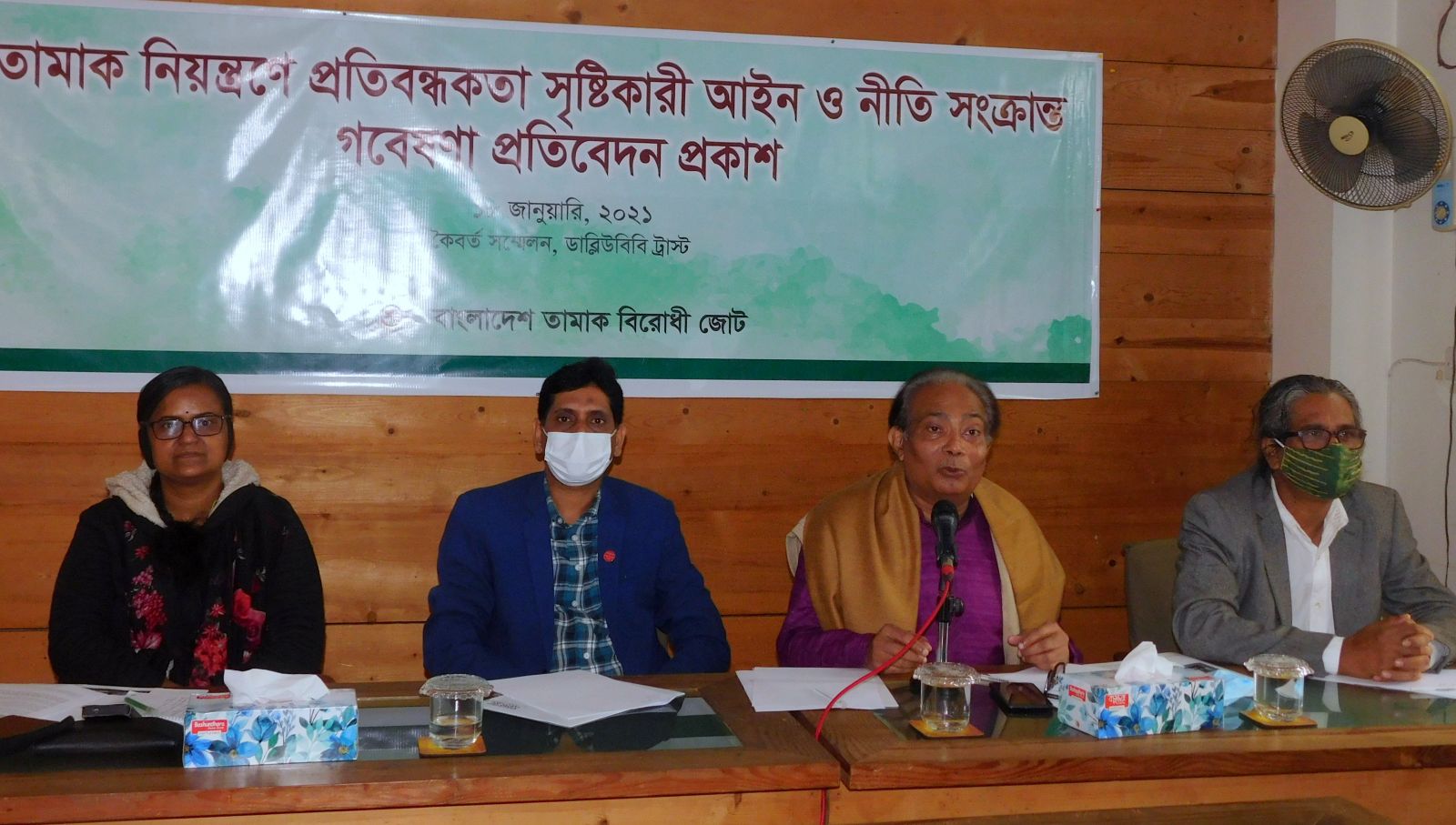 Public health development has close relation with the existing laws and policies of a country. Some people tend to influence these policies to meet their own interests and tobacco industries play an active role in this regard. It is the need of time to prioritize tobacco control and amend the laws that create obstacles to implement tobacco control initiatives. Speakers opined such in the dissemination program of research titled ‘laws and policies creating obstacles to implement tobacco control initiatives’. The event was organized by Bangladesh anti-tobacco Alliance and WBB Trust on 12 January 2021. The research was conducted by WBB trust with the support of The Union.

The President's (Remuneration and Privileges) Act, 1975 says that ‘No excise duty shall be levied on indigenous tobacco used in Bangladesh in the manufacture of cigarettes and on cigarettes manufactured in Bangladesh, when such cigarettes are for consumption by members of the President's household or by his guests, whether official or not.’ This clause needs to be amended considering the harms of tobacco upon public health. The research says, existing 11 laws, 7 rules and 2 orders create obstacles to implementing tobacco control initiatives. There are also some issues those are directly and indirectly promoting tobacco, such as- considering tobacco as a cash crop in the curriculum and providing supportive information on tobacco on the website of the Ministry of Agriculture.

Speakers said that, it is important to strengthen NTCC to achieve a tobacco-free Bangladesh as per the announcement by the Honorable Prime Minister. Foreign investment must not promote tobacco products. Some laws and policies of our country are indirectly facilitating tobacco industries. It is necessary to amend these considering the health hazard. The government must withdraw their share and representation from tobacco companies and avoid attending events organized by them. Also, the scope of the communication should be controlled.

Other Activity
Vendor management policy is essential to ensure safe and healthy food for the city dwellers
Necessity of the Implementation of National Tobacco Control Program to achieve the goal of 2040
It is necessary of amending the obstructing laws, withdrawal of the shares from the Tobacco Company
Farmers’ Market inaugurated at Mirpur Ward no 6 to ensure access to safe and healthy food
To ensure punishment for the Tobacco Companies violate the TC Law