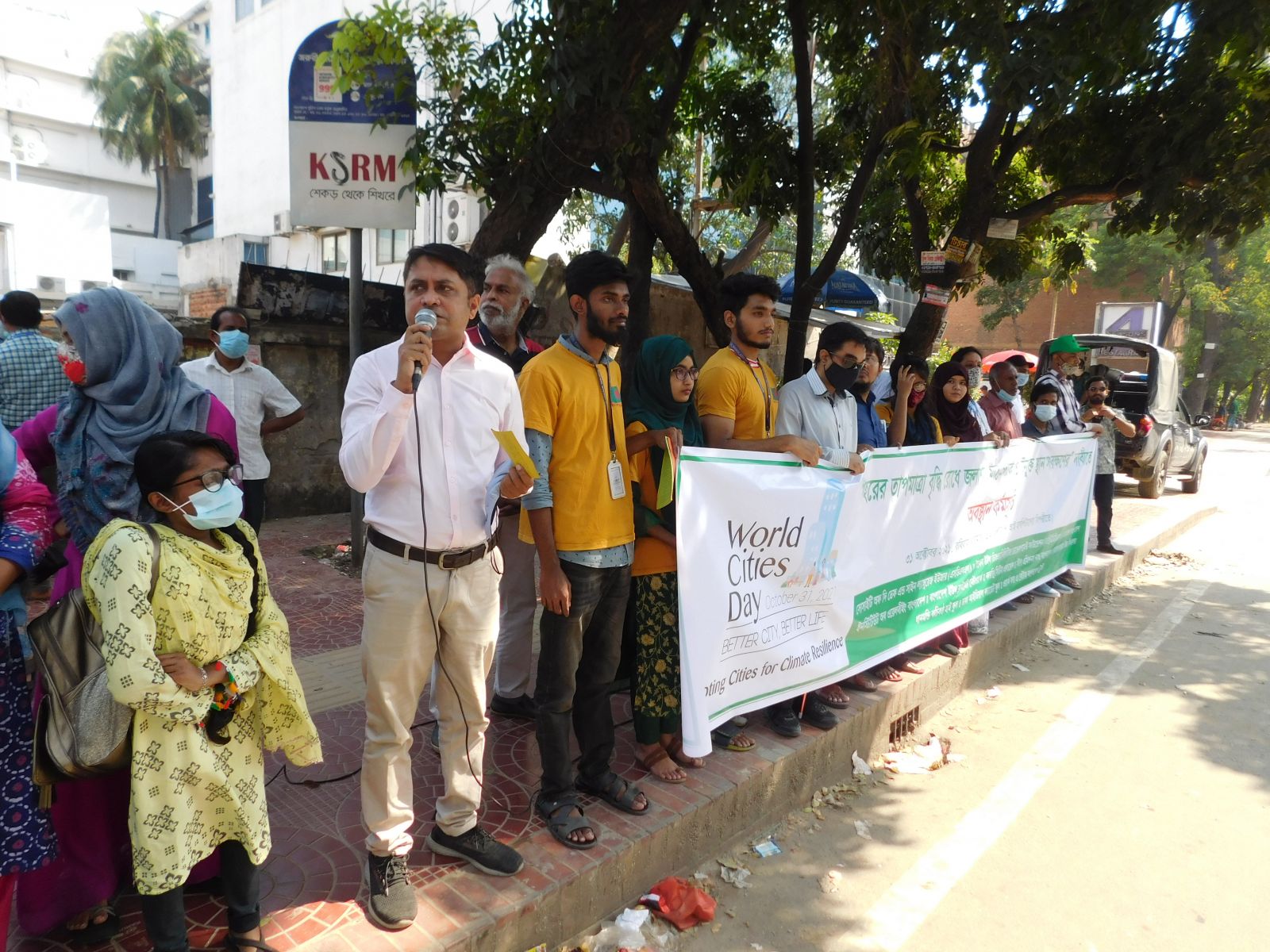 According to the resolution of the UN General Assembly, every year October 31 is observed as World Cities Day. In order to raise awareness about sustainable urbanization, World Cities Day is celebrated through various events in different countries. This year the theme of the day is "Adapting Cities for Climate Resilience". Due to unplanned urbanization and all kinds of economic activities taking place around urban areas, various kinds of negative effects are being observed, such as traffic congestion, pollution, encroachment of water bodies, occupation of parks and open spaces, increased level of carbon emissions, etc. In the last 20 years, the temperature in the capital Dhaka has risen by about three degrees Celsius. To reduce the urban heat it is essential to take some measures, such as- preservation and creation of field-park-open space, green space, rivers, canals, ponds and other waterbodies; prioritizing walking and non-motorized vehicles, such as rickshaws and bicycles, instead of motorized ones;prioritizing and building rail and water network for long distance travel and reduce the use of road transport; building community-based small-scale public spaces or pocket parks in abandoned and unused areas; promoting rooftop gardening and agriculture, urban agriculture and greening.Speaker opined such at the human chain titled "Conserve water bodies, playgrounds, parks and open spaces to prevent rise ofurban heat" organized by 9 organizations including Work For a Better Bangladesh Trust on the occasion of World Cities Day at Dhanmondi 27 (opposite of Bangladesh Eye Hospital) at 11.00 am on Sunday, October 31, 2021.

MA Mannan Monir, Founder &Principal of Dhaka Ideal School, said, “We are realizing the impact of climate crisis in our daily lives. Lack of awareness is exacerbating the misery of public life. It is very important to understand our responsibilities towards the city. Encouraging students to walk to school can make a significant contribution to reduce carbon emissions.

Shahana Akhter, General Secretary of the Human Rights Disability Development Foundation, said there is a shortage of playgrounds for children in the city, which is an obstacle to their proper physical and mental growth. If we fail to create playing and socialization opportunity, it will cause the risk for future generation. It is important for the government to take initiatives to increase open and pollution free zones in the city.

Jahangir Alam, Assistant Teacher at RayerbazarHigh School, said the rising temperature is a threat to public life. We have many rivers as well as canals, which play an important role in keeping the city's temperature cool. It is possible to restore the livability of the city by reviving rivers and canals from illegal occupation and taking appropriate steps to conserve them.

Ayesha Siddique, a volunteer of Chayatol Bangladesh, said, "We need to be more diligent in greening the city, increasing field-parks, conservingwaterbodies, preventing pollution and taking necessary steps to restore the livability of the city."

ANM MashumBillah Bhuiyan, Policy Officer of the Institute of Wellbeing Bangladesh, said the rate of noise and air pollution has reached to an alarming level as the number of motorized vehicles has increased to great extent. Necessary legal steps must be taken to control the number of vehicles.

Ziaur Rahman, Senior Project Officer, Work for a Better Bangladesh Trust presided over the event and he said, combined effort is essential to make our city livable.