"It is important to formulate a code of conduct in the light of FCTC to protect tobacco control laws and policies very quickly." 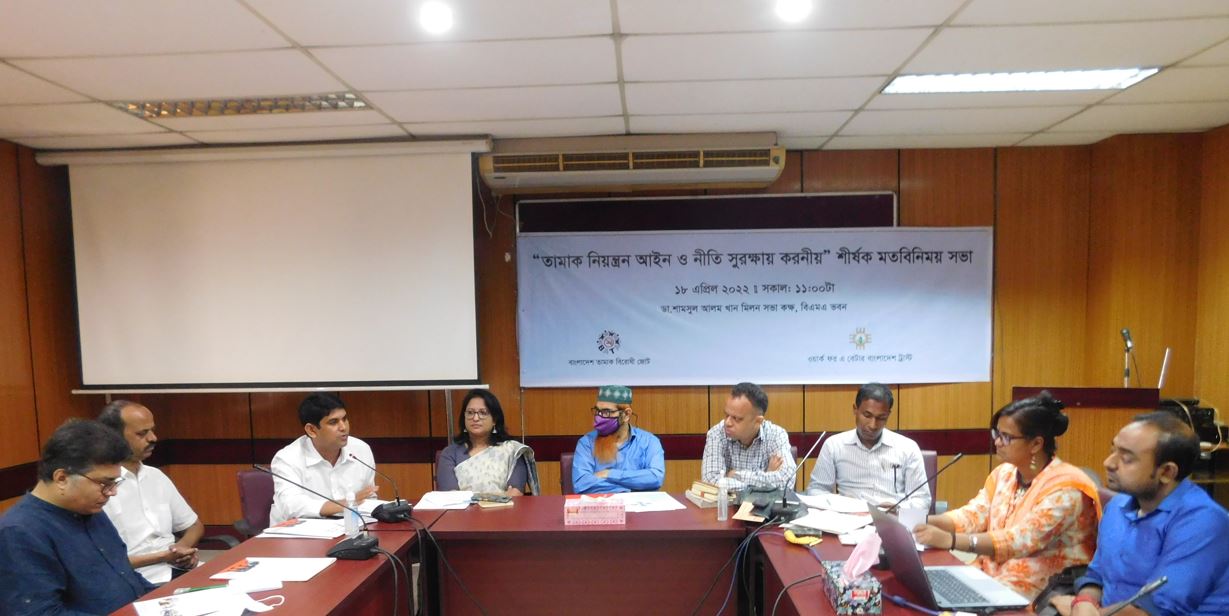 Tobacco use is one of the leading causes of premature and preventable death in the world today. According to Article 16 (1) of the Constitution of the People's Republic of Bangladesh, the state has the responsibility to develop and protect public health. Considering the dangers of tobacco, the government is taking various steps to reduce its use. Hon'ble Prime Minister Sheikh Hasina has expressed her determination to build a tobacco free Bangladesh by 2040. Tobacco control has already been included in the Eighth Five Year Plan.
In the current context, it is a matter of great concern that although the government has taken positive steps to control tobacco, the illegal intervention of tobacco companies is hampering the implementation of laws and formulating supportive policies as well as posing a serious risk to public health. In view of the above, a joint initiative of 'Bangladesh Anti-Tobacco Alliance' and 'Work for a Better Bangladesh (WBB) Trust' will be held on April 17, 2022 at 11 am in the meeting room of Shaheed Dr. Shamsul Alam Khan (Milon) at BMA Bhaban. And what needs to be done to protect the policy. ” Mithun Vaidya,
Project Officer, WBB Trust, presented the keynote address at the event, which was chaired by Gauss Pierre, Director, Work for a Better Bangladesh (WBB) Trust, and conducted by Syeda Ananya Rahman, Head, Department of Health Rights.
Honorable guests were present at the meeting, Hossain Ali Khandaker, Coordinator (Additional Secretary), National Tobacco Control Cell (NTCC), Md. Billal Hossain Khan, Private Secretary to the Chairman, National River Protection Commission, Syed Mahbubul Alam, Technical Consultant, The Union, Helal Ahmed, Acting Coordinator, Bangladesh Anti-Tobacco Alliance, Sushant Sinha, Senior Reporter, Ekattar Television and Md. Nasir Uddin Sheikh, Country Manager, Vital Strategies.
Hossain Ali Khand
aker said tobacco companies were trying to mislead government officials into engaging in tobacco campaigns. In this case, it is necessary to have a specific policy. He added that we need to move forward with more tactics in tobacco control. We have a moral obligation to formulate guidelines as per FCTC Article 5.3. The government is slowly taking steps to implement that goal.
Md. Billal Hossain said that the cost of treatment of diseases caused by tobacco use is much higher than the revenue earned from tobacco products. The Tobacco and Tobacco Products Control Act (2005) needs to be properly implemented. In order to reach the desired goal, everyone has to work together to control tobacco.
Nasir Uddin Sheikh said that the existing problems in amending the tobacco control law and policy protection should be identified and a solution should be found.
The government will have to move away from the imaginary idea that the government's revenue will go down as soon as taxes are increased. In addition to raising taxes on the control of narcotics such as tobacco, the implementation of licensing system needs to be ensured and strengthened.
Gauss Pierre said the purpose of the tobacco company is to make a profit. On the other hand, the government and our objective is to improve public health. We need to build a strong and vigorous movement against tobacco companies that produce products that are harmful to public health. To make the National Tobacco Control Cell even stronger, the non-governmental organizations need to work in collaboration with the government.
Helal Ahmed
said that the tobacco companies are carrying out various campaigns around the upcoming budget. Individuals from many important organizations are also working for the tobacco company. Now is the time to make a list of those who are working for and against tobacco and to take necessary action against them.
Syed Mahbubul Alam said the tobacco companies were misleading high-ranking government officials with misinformation in order to protect their own interests and take advantage of the situation unjustly. To solve this problem, code of conduct should be formulated for all official employees. The content of the tobacco company's discussions with the government should be made public as well as its transparency and accountability should be ensured.
Sushant Sinha said that despite having less than 10 per cent stake, the board of directors of the British American Tobacco Company (BATB) has a number of high-ranking government officials. This calls into question the government's overall tobacco control efforts. Social responsibility activities
(CSR) Tobacco companies spend more than other companies, but the promotion of tobacco companies can be noticed. The real purpose of the Battle of Mind or various such programs is to increase the company's publicity and create opportunities for intervention. The information of illegal interference of the company should be presented to the government more precisely. He also demanded that an acceptable and strong tobacco tax policy be formulated as soon as possible to implement the pledge of the Hon'ble Prime Minister.
Also present as speakers at the meeting were Abu Naser Anik, Project Officer, Aid Foundation, Moazzem Hossain Tipu, Program Officer, DAS, AFM Sarwar, Former Vice Principal and Head of Department, Dhaka Dental College and others. Also Natab, TCRC, National Heart Foundation Hospital & Research Institute, Puba, Ubinig, BCCP, IDF, Voice, Ipsa, Naripaksh, Circle Foundation, Navnita Mahila Kalyan Samiti, Bachte Shekho Nari, Keraniganj Human Resource Bangladesh, Several media representatives were present
Other Activity
Tobacco is a visible threat to the environment and public health
Tobacco Companies are Attracting the Young People to Smoke by Breaking the Law
Ministries concerned need to have a clear plan for tobacco control
Campaign to Increase Awareness Among Motor Vehicle Drivers to Avoid Unnecessary Honking
Law amendment is necessary to build a tobacco free Bangladesh