Law amendment is necessary to build a tobacco free Bangladesh 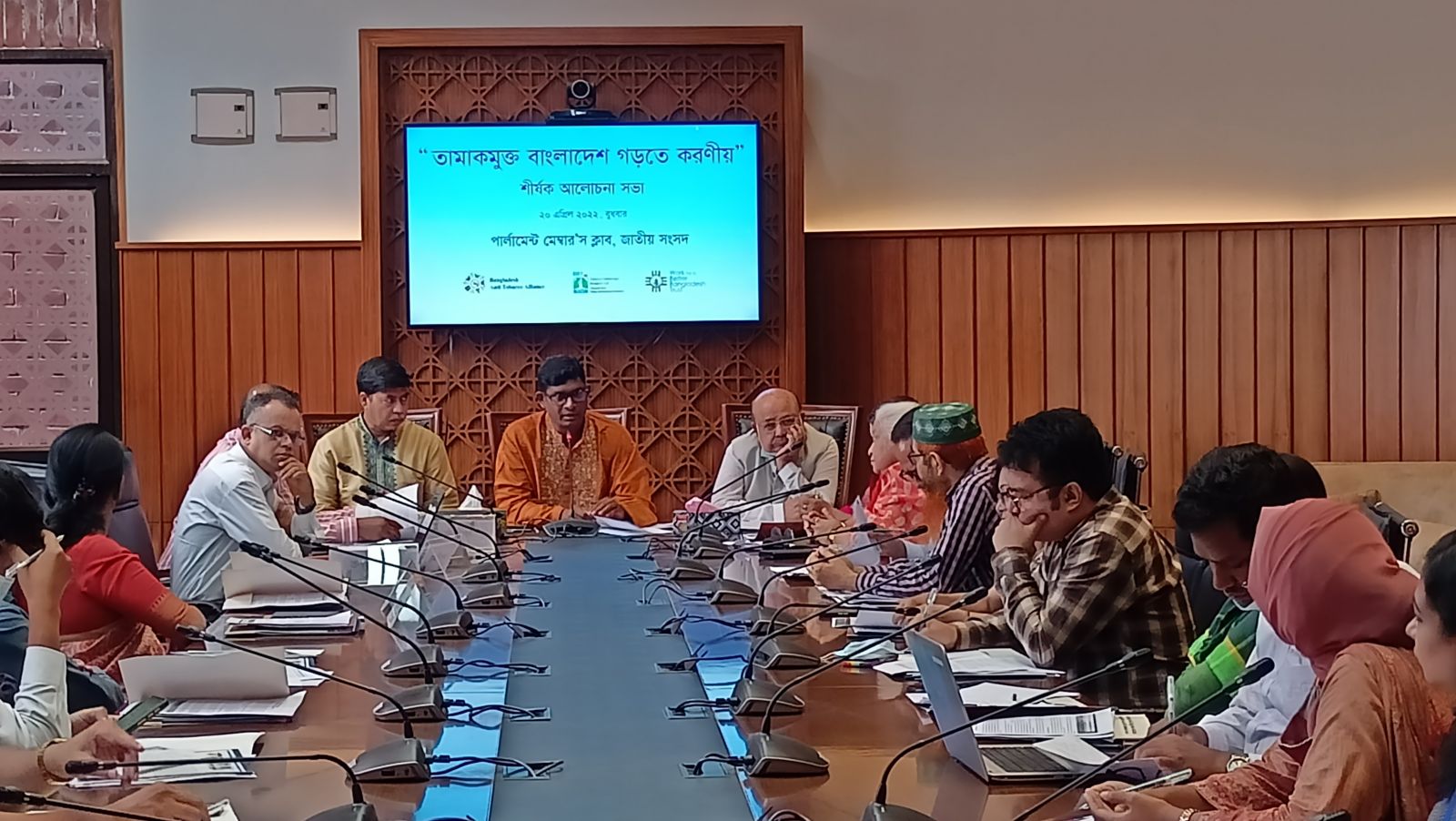 Tobacco use is adversely affecting the socio-economic status and the environment. In order to overcome this situation, according to the FCTC, it is important to strengthen the tobacco control laws and make the laws that hinder the control of tobacco up-to-date. Bangladesh has many achievements in tobacco control. The country's government chief has vowed to control tobacco. In the current context, it is important to amend the Tobacco Control Act as well as formulate a strong tobacco tax policy and counteract the influence of tobacco companies.

Considering the above issues, today, April 20, 2022, at 11 am, the Bangladesh Anti-Tobacco Alliance, Tobacco Control and Research Cell and Work for a Better Bangladesh (WBB) Trust jointly organized a discussion on "What to do to build a tobacco free Bangladesh" in the Parliament Members Club Room. Mozaffar Hossain Paltu, Advisor of Bangladesh Anti-Tobacco Alliance (BATA) and President of Bangladesh National Tuberculosis Prevention Association (NATAB) presided over the function and Barrister Shamim Haider Patwari MP (Gaibandha-1) presented the keynote address. Syed Mahbubul Alam. The meeting was attended as a guest of honor, Mr. Habibe Millat MP (Sirajganj-2), Begum Arma Dutt MP (reserved women's seat-11), Mr. Rana Mohammad Sohel MP (Nilphamari-3), Begum Adiba Anjum Mita MP (reserved women's seat-36) and Mr. Hossain Ali Khandaker ( Coordinator-Additional Secretary, National Tobacco Control Cell).
In the presentation of the main article, the speaker presented the researched information about the achievements of Bangladesh in tobacco control, the intervention of companies, and the prevailing misconceptions in tobacco control. Honorable Members of Parliament and responsible officials were requested to play an active role in amending the law and increasing tobacco tax from their respective positions. All heart treatments can be provided free of cost if specific taxes and tobacco company tax evasion are prevented.
Mozaffar Hossain Paltu said that as a result of tobacco cultivation, the fertility of agricultural land is lost and the processing of tobacco has an adverse effect on the environment. He also demanded withdrawal of government shares from tobacco companies to build a tobacco-free Bangladesh by 2040 as per the Prime Minister's conviction. Wherever the head of government is in favor of tobacco control, officials in the republic must also come forward.
Habib Billaat said the death toll from the Corona epidemic was just one-third of the death toll from tobacco-related diseases. A letter has been sent to the Health Minister to amend the Tobacco Control Act. A letter has also been sent to the finance minister demanding an increase in taxes on tobacco, the progress of which is yet to be ascertained. We hope the government will respond positively.
Aroma Dutt said a practical outline of how the tobacco control program could be taken forward and how it could be changed by identifying the weaknesses of the existing law should be presented to the Hon'ble Prime Minister. A strong committee should be formed with civil society, government officials and members of parliament. Finally, he called for speeding up the tobacco control movement.
Abida Mita said there is no alternative to the continuous movement to control harmful products like tobacco. If it is possible to discourage people from using tobacco, the risk of heart disease will be greatly reduced. Finally, he appealed to the educated sections of the society to join the tobacco control movement.
Rana Mohammad Selim said that in many countries of the world, significant increase in taxes has resulted in unprecedented success in tobacco control. There are several flaws in the Tobacco Control Act in Bangladesh which are major obstacles to tobacco control activities. Steps must be taken to address these errors step by step. At the same time, laws that conflict with tobacco control need to be amended.
Hossain Ali Khandaker said that the tobacco control law has been finalized by NTCC and a resolution has been prepared and sent to the concerned ministry. It will go directly to the Ministry of Law and Finance. He also called upon the National Board of Revenue to participate in this integrated tobacco control program. He cited the company's interference in tobacco control policy and the government's existing stake in tobacco companies as major obstacles to tobacco control. Finally, he lauded the positive participation of the members of Parliament in tobacco control.
Sushant Sinha said that despite having less than 10 per cent stake, the board of directors of the British American Tobacco Company (BATB) has a number of high-ranking government officials. This calls into question the government's overall tobacco control efforts. Although other companies spend more on social responsibility activities (CSR) than other tobacco companies, the promotion of tobacco companies is more noticeable. The information of illegal interference of the company should be presented to the government more precisely. He also demanded that an acceptable and strong tobacco tax policy be formulated as soon as possible to implement the pledge of the Hon'ble Prime Minister.
Also, the speakers at the meeting stressed the need to amend the Tobacco Control Act to make it up-to-date. They said that despite the positive steps taken by the government to control tobacco, illegal intervention of tobacco companies, implementation of laws and formulation of supportive policies are creating obstacles as well as creating serious risks in improving public health. There is a reflection of political goodwill behind the recent achievements in tobacco control in Bangladesh. In addition to strengthening the existing law on tobacco control, it is necessary to amend the existing laws that are creating obstacles in tobacco control in Bangladesh. Attended the meeting as a negotiator, said. Ahmaduzzaman (Executive Director, Finance Department, Ministry of Finance), Zakir Hossain Bhuiyan Masud (Special Representative, WHO), Nasir Uddin Sheikh (Country Manager, Vital Strategies Bangladesh), Iqbal Masud (Director, Health Sector, Dhaka Ahsania Mission) (Focal Person, Stop), Hamidul Islam Hillol (Project Manager, BER), Sagufta Sultana (Project Director, Aid Foundation), Syeda Ananya Rahman (Head of Program, WBB Trust), Md. Bazlur Rahman (Associate Professor, DIU) and other prominent personalities.
Other Activity
Tobacco is a visible threat to the environment and public health
Tobacco Companies are Attracting the Young People to Smoke by Breaking the Law
Ministries concerned need to have a clear plan for tobacco control
Campaign to Increase Awareness Among Motor Vehicle Drivers to Avoid Unnecessary Honking
"It is important to formulate a code of conduct in the light of FCTC to protect tobacco control laws and policies very quickly."