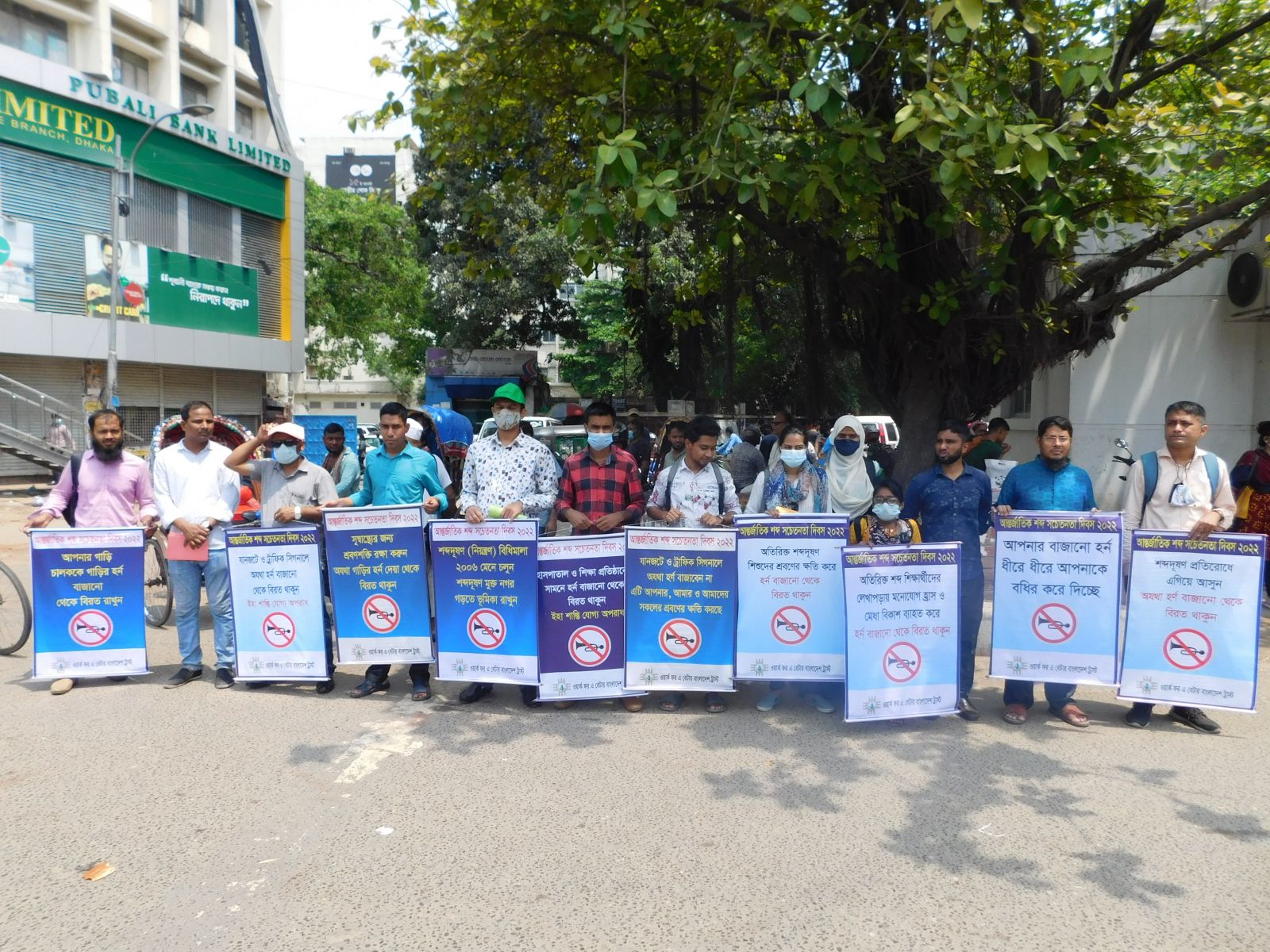 On March 27, 2022, at 11.00 am at Shahbagh, an awareness campaign was organized jointly by Save the Environment Movement (POBA), Rayer Bazar High School, Dhaka Ideal Cadet School, Life Serve Bangladesh, The Institute of Wellbeing Bangladesh (IWB), Carfree Cities Alliance Bangladesh on “Avoid Unnecessary Honking to Protect Hearing and Public Health” and speakers opined such in the campaign. Flowers and leaflets were distributed among the motor vehicle drivers from the camping to motivate them to avoid unnecessary honking.

Abu Naser Khan, Chairman of the Save the Environment Movement (POBA), said noise pollution causes hearing loss as well as various problems including high blood pressure, anxiety, insomnia, and mental issues. Children are particularly at risk because the effects of noise pollution on them can be permanent. Excessive noise exposure of pregnant women increases the risk of deafness in children. At presentnoise level in Dhaka is the highest due to unnecessary and excessive horns of motor vehicles and he city dwellers are the victims of horrible noise pollution.

ANM MashumBillahBhuyan, Policy Officer, The Institute of Wellbeing Bangladesh, said that according to the Noise Pollution (Control) Rules, 2006, in case of producing more noise than the prescribed level or breach of law, the authorized officials can seize the source or equipment of the noise. If convicted, the first offense carries a penalty of one month's imprisonment or a fine of five thousand taka or both, and the second offense carries a six-month imprisonment or a fine of 10,000 taka or both. But due to lack of proper enforcement of the law, noise pollution is on the rise.

MA Mannan Monir, Founder of Dhaka Ideal Cadet School, said that besides enforcing the law, there is a need to raise awareness among the people about controlling noise pollution. Drivers need to be educatedspecially to avoid unnecessary honking. Because of the honking, the driver himself, his children and all his relatives are suffering from the negative impacts of noise pollution.

The campaign raised several recommendations such as - avoid unnecessary honking in traffic jams, not to honk in front of hospitals, educational institutions, to obey the Noise (Control) Rules, 2006, not to use banned hydraulic horns in vehicles, to respect the no-horn sign, to avoidon street parking, etc.

Other Activity
The company is delaying the government's serious efforts to control tobacco
Public Health needs to be given top priority in Fiscal Policy
Farmers market at Mohammadi Housing Society, Mohammadpur
The government's existing share in tobacco companies is a major impediment to tobacco control
Farmers’ Market inaugurated in Tikatuli, ward no.39, DSCC