Farmers’ Market Inaugurated in Ward no.56 of DSCC 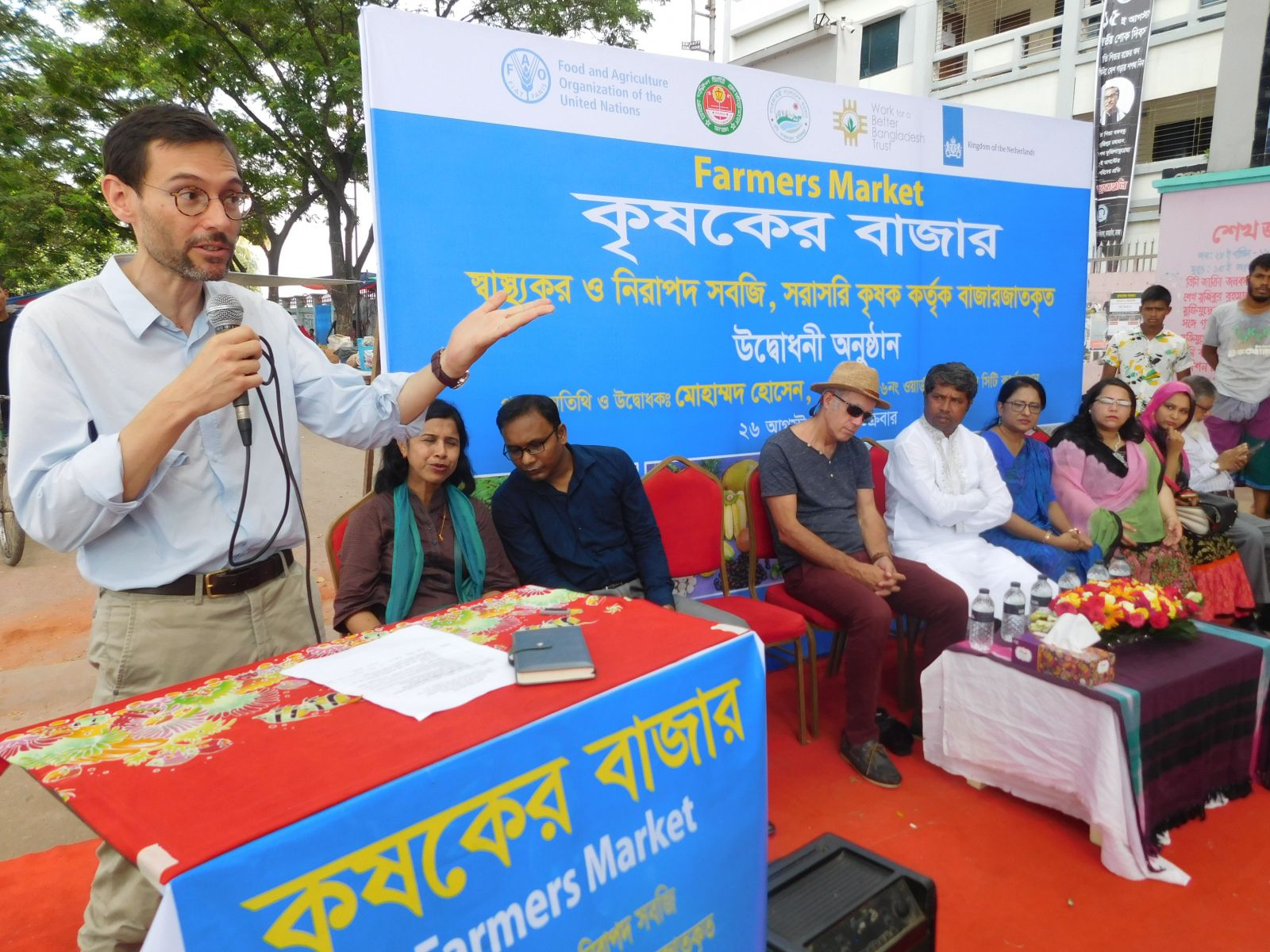 A farmers’ market has been inaugurated in Kamrangirchar to benefit both farmer and consumer. It is the third farmers’ market in Dhaka city under the Dhaka Food System project by Food Agriculture Organization of the United Nations, but it is the first farmers’ market in Dhaka South City Corporation. To ensure the safe food, 10 farmers from Kalatiya Union, Keraniganj Upazilla, who have been verified by Department of Agricultural Extension as safe producer, will sell their vegetables and fruits in the market. Every Friday the market will be organized in front of Sheikh Jamal School at Kamrangirchar on the bank of Buriganga river from 7 am to 2 pm. We believe the market will play an important role to ensure healthy and safe food to the city dwellers. On 26th August 2022, the farmers’ market in Ward No 56, Dhaka South City Corporation was inaugurated in collaboration with Embassy of the Kingdom of the Netherlands, Dhaka South City Corporation, Department of Agricultural Extension, Food and Agriculture Organization of the United Nations, and Work for a Better Bangladesh Trust and speakers opined such in the ceremony.

Mohammad Hossain, Councilor, Ward No 56, DSCC said that the Farmers’ Market has been started in a small scale and will be organized once a week. But we want to make it a permanent arrangement so that the local people can buy the healthy food every day. To assure water and toilet facilities for the farmers, the road in front of the school has been selected to establish the farmers’ market. The Councilor Office will make sure that the farmers and the consumers both get benefits from this initiative.

Md. Shahidullah Amin, Upazilla Agriculture Officer, Keraniganj said that ten farmers came from Kalatiya Union to this Farmers’ Market. All of them are trained to conduct safe farming by the Department of Agricultural Extension. We want to confirm the availability of safe food not only to export but also for the people of the country. The farmers’ market project has been taken up to make sure fair profit for the farmers as well as safe vegetables for the city dwellers. We are seeking overall cooperation from the Councilor’s Office and the local people.

Mushfiqa Sultana, Metropolitan Agriculture Officer, Kamrangirchar shared that the farmers who practice safe farming, know the process of using pesticides and when to harvest the produce. Besides they use organic pesticides instead of chemical ones. We appreciate this type of initiative.

Xavier Bouan, Senior Technical Advisor of Dhaka Food System Project, Food and Agriculture Organization of the United Nations said that this initiative is a joint venture of DSCC, FAO and WBB Trust with the funding of Embassy of the Kingdom of the Netherlands. Total 16 markets will be established under this initiative. We believe that both farmers and consumers will get benefit from it.

Pedro Andres Garzon Delvaux, Food System Policy Economist said that the most crucial shareholder in Farmers Market are the farmers and local people. Farmers cultivate safe and healthy food and bring them to the market for the city dwellers. The farmers will not be able to profit if the local people do not buy. Both sides will be benefited if safe vegetable-fruits are brought according to the demand of the area people.

Other Activity
The company is delaying the government's serious efforts to control tobacco
Public Health needs to be given top priority in Fiscal Policy
Farmers market at Mohammadi Housing Society, Mohammadpur
The government's existing share in tobacco companies is a major impediment to tobacco control
Farmers’ Market inaugurated in Tikatuli, ward no.39, DSCC